The BPS users list contains all information about users in the system. The AD cache was replaced with the BPS user list, but the AD and AAD are still the preferred methods for managing user data. The BPS users list will now combine users synchronized from the AD or AAD with those from external authentication providers, into one universal cache of all users of the system. The BPS user list serves as the base for granting privileges to view and access the system, and also contains data of the company structure. Its status has to be constantly updated to provide users with uninterrupted access. This is why a correct configuration of this system element and monitoring the synchronization are critical system tasks. 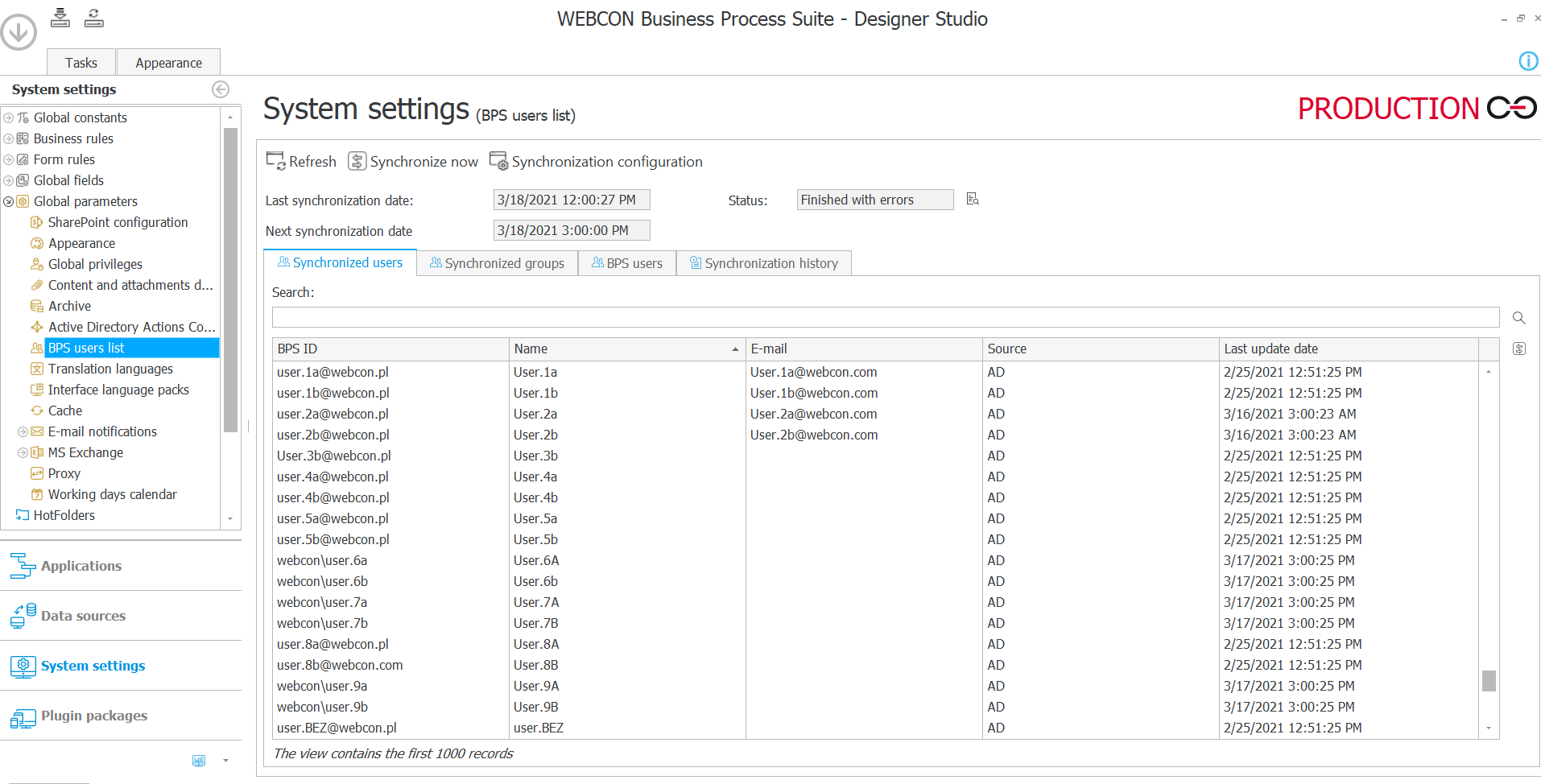 In the "Settings" tab, you can select a domain or a sepcific Organization Unit (OU) from which user/group/organization data will be downloaded. You can select several domains or OUs which will be synchronized. The domain and OU list are available by clicking on “+” button.

The configuration of synchronized domains/OU’s is done also in the WEBCON BPS installer during system update from older versions to 2017.1. However in this case synchronization is not done by the installer, but by WEBCON WorkFlow Service in time set in the schedule after correct installation.

Users can work with the system (i.e. data access) as soon as the first successful synchronization is complete. 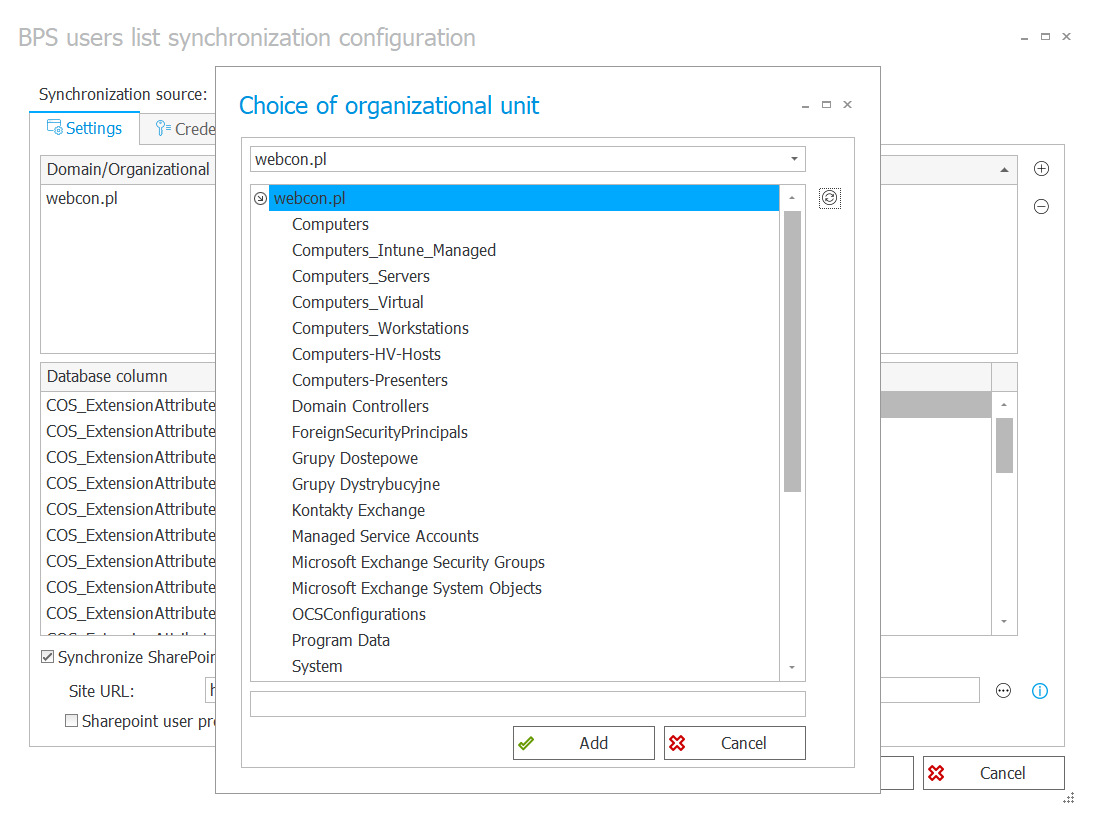 Available on the list by default, is a domain to which a server with WEBCON WorkFlow Service installed belongs. Also available are all domains from the same domain forest. If there are configured trust relationships with another domain/forest, then those also trusted domains/forests are also visible on the list.

An OU structure is displayed within the domains, which allows to narrow down the synchronization to a chosen entity.

The range of data downloaded from the Active Directory during synchronization is included in Appendix A. However it is possible to download additional data about the synchronized item from AD and save it in the BPS database. 30 additional properties that were read from the AD are available to download, and their values will be saved on selected database columns.

Pointing to additional data for synchronization is not necessary.

Some information about a user can be independently stored both in Active Directory and in the user's SharePoint profile. This information is:

The default user in the context of whom the synchronization is executed is the user on whom the WEBCON WorkFlow Service works. 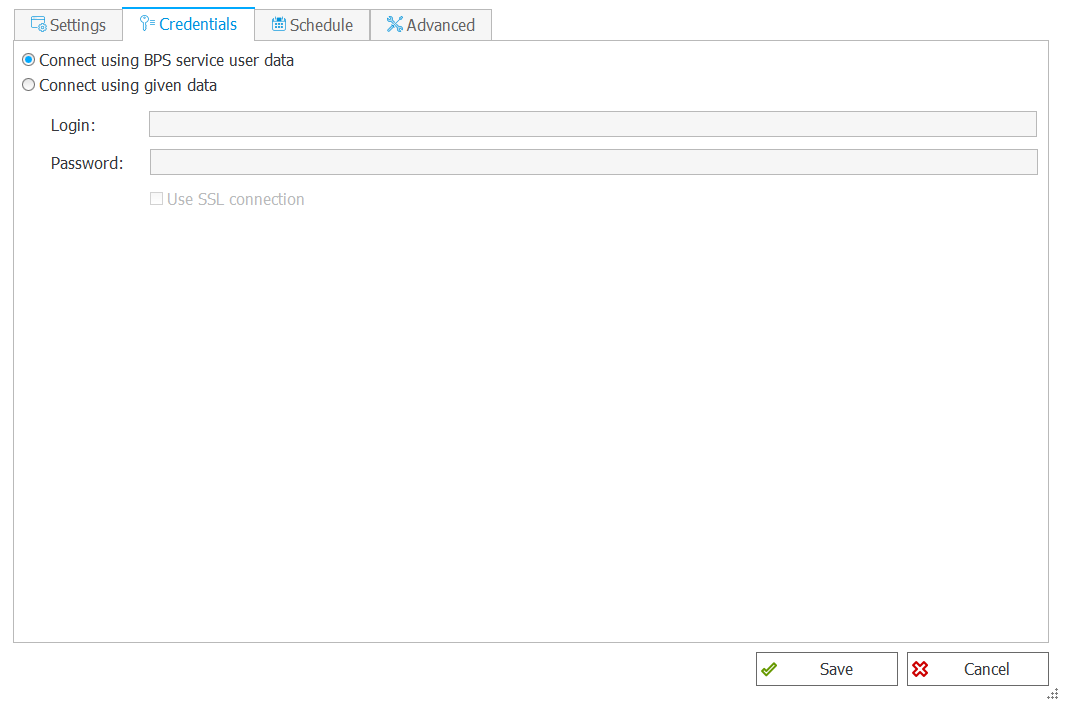 The schedule allows defining hours of synchronization execution. In order to ensure that WEBCON BPS has current data, synchronization should be carried out a couple of times a day.

Default configuration carries out the synchronization every 3 hours. In most cases, this configuration is enough to bring up to date even frequently changing data. The synchronization mechanism is additionally integrated with user management actions (“Active Directory” action groups and “SharePoint – privileges”). If such an action is executed, the system will start synchronization for users edited outside the schedule and instantly update the BPS user list.

Synchronization schedule can be tailored to the specific needs of individual system implementations. When changing synchronization hours it is important to remember about: frequency of data changes by the AD and SharePoint or maintenance of the system (it requires halting the synchronization in a specified timeframe). 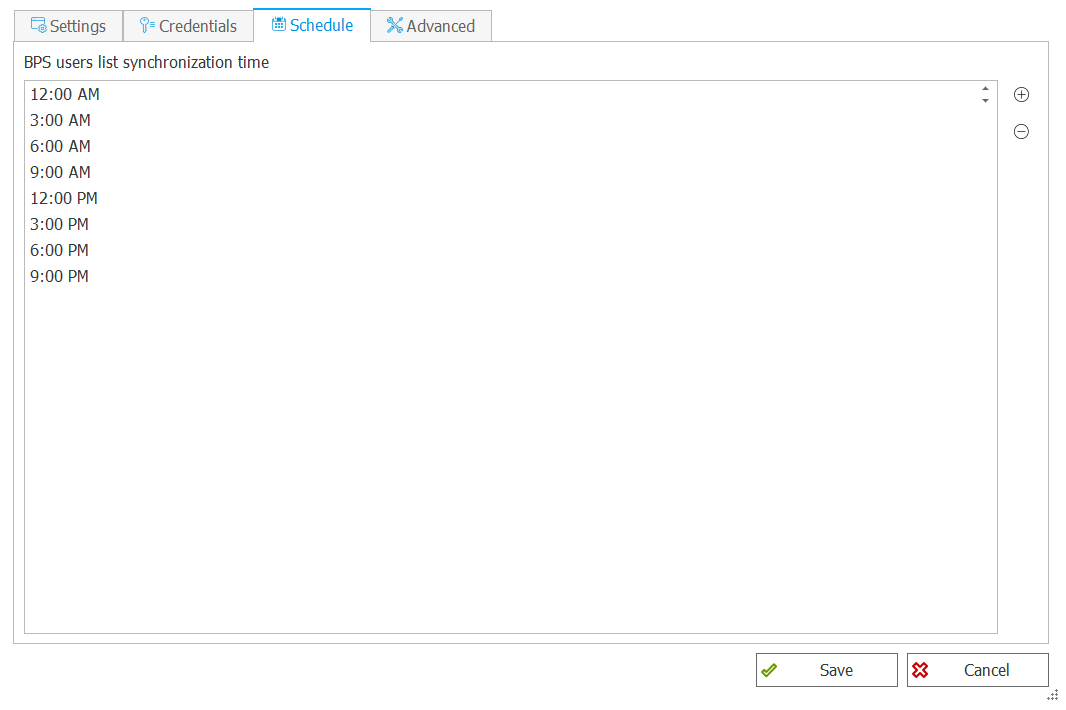 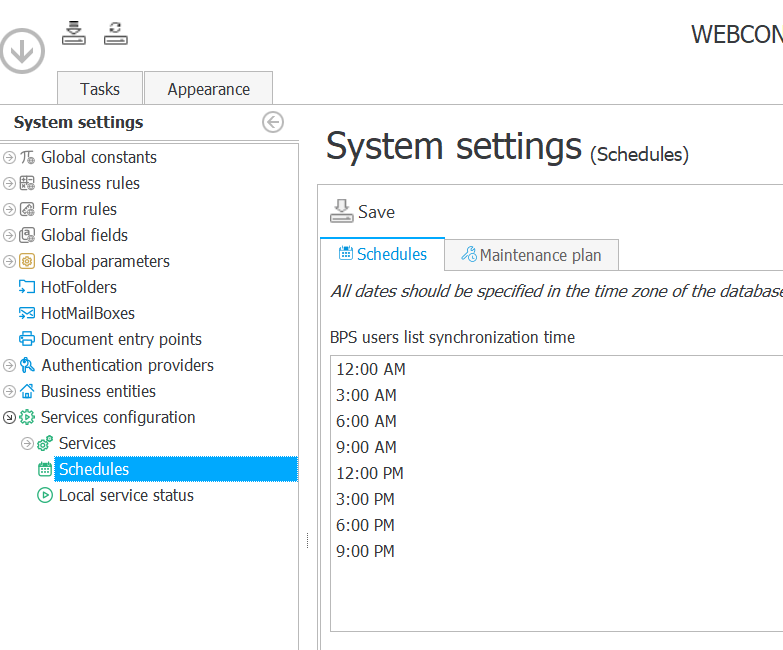 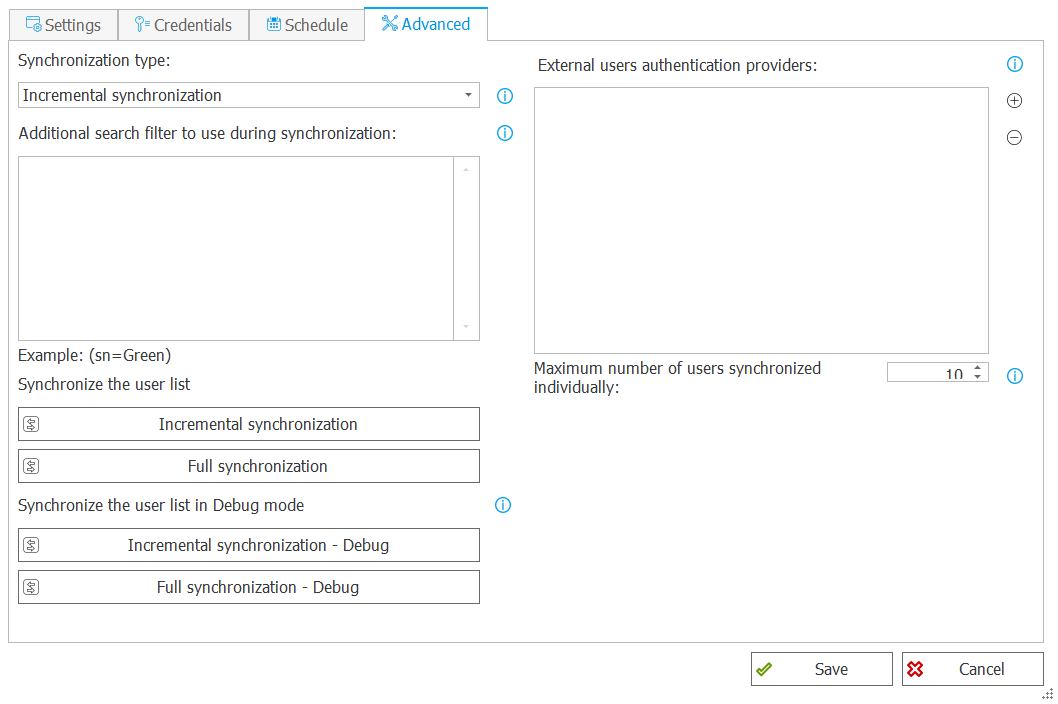 To ensure uninterrupted work for WEBCON BPS users, synchronization has to be constantly monitored and all the abnormalities corrected.

Events that might occur during the synchronization are divided into two categories: errors and warnings. This division comes from the influence of a specific event on the work of the system.

Examples of events labeled as errors:

Examples of events labeled as warnings: 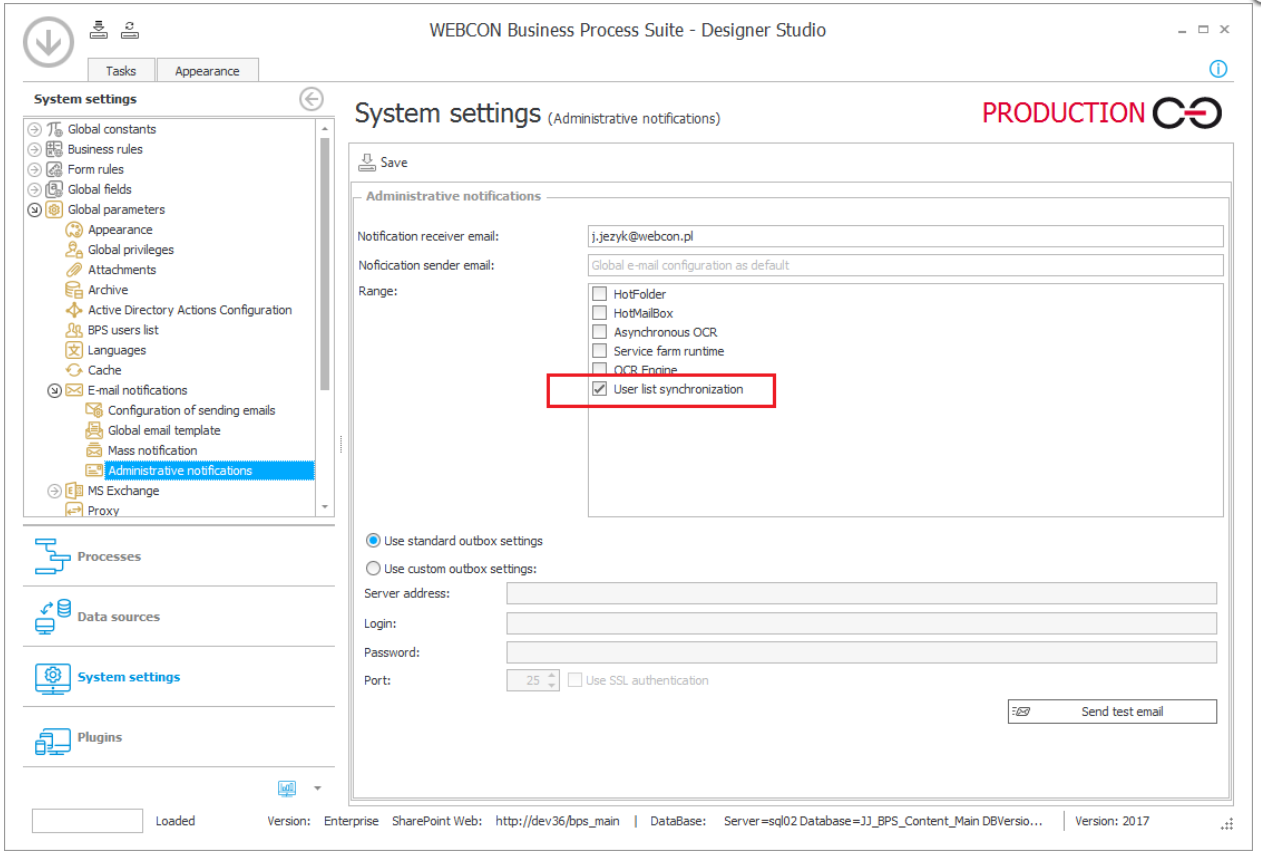 Rules of the synchronization will be described based on a handful of BPS and Active Directory configuration scenarios.

A whole AD domain from which the data has to be synchronized is selected in BPS configuration.

Example of Active Directory’s structure in OU New York consists of employees, but their superior is a part of OU London. OU London contains also other user and group objects.

The user in the context of whom the synchronization is executed („Credentials” tab) has privileges allowing to read data both from OU New York and OU London. 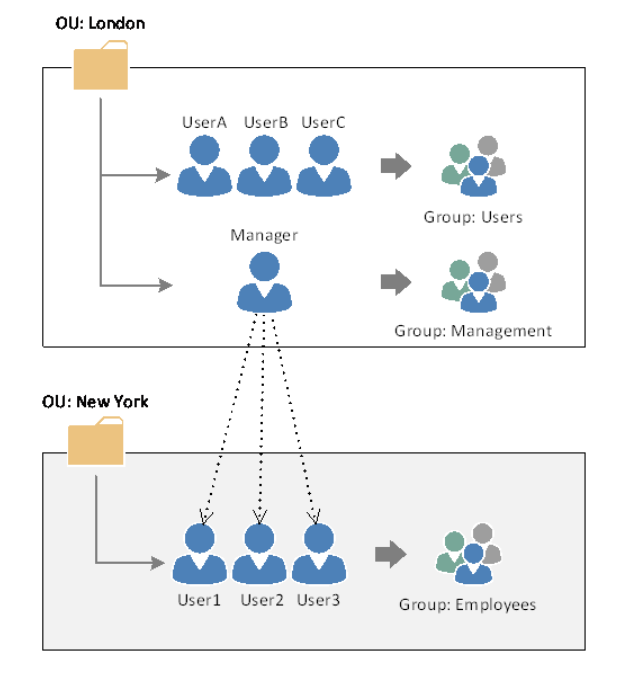 During the synchronization data of all the users and groups of OU New York will be downloaded (User1, User2, User3 and Employees). For users whose superior belongs to OU London, even though of the fact that synchronization is executed for OU New York, the superior’s data will be also downloaded. This also means that his data (the Manager), groups that he belongs to (Management) and his relationships with his superiors will be loaded.

Other users and groups from OU London will not be downloaded (UserA, UserB, UserC, and Users).

If there are subordinate OU’s in OU London, then this data will be downloaded as well.

All the changes (adding/removing a group, user, affiliations) will be saved in the BPS database and have their reflection in BPS users list.

Synchronization of specified OU without access to unsynchronized OU

In BPS configuration a specific OU was selected from which the data is going to be synchronized. (Active Directory contains a couple of OU’s).

This sample Active Directory structure in OU New York consists of employees, but their superior is a part of OU London. OU London contains also other user and group objects.

The user in the context of whom the synchronization is executed („Credentials” tab) has privileges allowing to read data from OU New York but doesn’t have access to OU London. 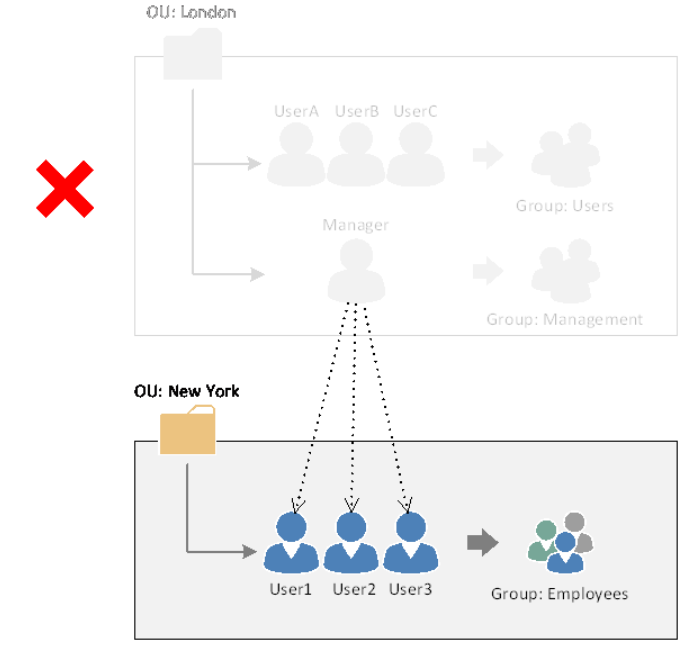 During the synchronization data of all the users and groups of the OU New York will be downloaded (User1, User2, User3, and Employees). For users whose superior belongs to OU London, the superior’s data will attempt to be read. However, the lack of privileges to this data will cause the reading to fail. In the synchronization log, a warning will appear informing about the lack of ability to read data for this “Manager” user.

If there are subordinate OU’s in OU London, then this data will be downloaded as well.

All the changes (adding/removing a group, user, affiliations) will be saved in the BPS database and will have their reflection in BPS users list.

Data from both sources (AD and SharePoint) is merged (i.e. additional information about user’s affiliation to SharePoint groups) and then saved in WEBCON BPS database. The diagram below shows the steps of the synchronization process.

The minimum range of data allowing to identify a specific user, is their login and UPN. For groups it is the SID. If those identifiers are read from Active Directory then the synchronized object is saved in BPS database. If the identifiers are not read, the information about user/group will not be saved in BPS database which means it won’t be available in BPS users list as well.

Identifiers themselves are not enough for correct system operation, especially when it comes to the functionalities based on privileges, group affiliation or organizing structure. This is why in case the full information about user/group was not downloaded, this object is marked as “not fully updated” with corresponding information in the synchronization log.

The administrator must to identify the reason for it (i.e. lack of specific read privileges) and fixing the configuration if needed, to ensure a full update. In some cases it might be needed to use Full synchronization instead of Incremental synchronization.

If data marked as „not fully updated” is not fixed in 24 hours, then in the next synchronization after this time passes, the data will be completely removed from the database and the user’s work in the system will not be possible.

Appendix A – Range of data downloaded from AD during synchronization

Our website uses cookies to better meet your requirements. Proper configuration of browser options allows you to block or remove cookies but can also cause the site to not function properly or even at all. By continuing to use the site, with no change to your browser settings, you agree to the use of cookies. Read our privacy policy to get more information.